The Serengeti National Park is the most impressive Tanzanian reserve for both its beautiful landscape and also for its extraordinary natural migration show. The migration of wildebeest is an impressive event. It takes place in Kenya and Tanzania and it is the greatest show of transhumance on earth. From the plains of the Serengeti to those of Masai Mara, thousands of wildebeest and zebras migrate to greener pastures according to the seasons, and the cycle of life and death repeats itself. Predators follow the migration closely, waiting for the opportunity to prey on weaker prey. It is difficult to give a precise timing of the migration which changes every year because it is a spontaneous and unpredictable natural event.

The seemingly unending plains of the Southern Serengeti and the Conservation Area are inhabited by enormous herds of wildebeests and zebras. The great herds graze on rain ripened grass. In the calving season (late January through mid March) the herds concentrate at the Ndutu and Salei plains (Southern Serengeti / Ngorongoro Conservation Area) attracting the attention of predators like lions, cheetahs and hyenas. During this period the migration is best observed from Ndutu Safari Lodge, Kusini Camp or any of several private tented camps used by mobile safaris such as "Serengeti Savannah Mobile Camp". These include campsites in the Ndutu / Naabi area. 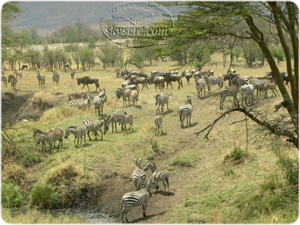 The depleted plains are unable to sustain the endless herds. The migration, heading west and north, moves from the short grass plains of the Southern Serengeti / Ngorongoro Conservation Area to the long grass plains and woodland of the Serengeti’s western Corridor, almost to Lake Victoria. It is the long rains season and this period is considered off season for wildlife viewing in Kenya and Tanzania as roads are often impassable. Serengeti Savannah Mobile Camp, Ndutu Safari Lodge, Serengeti Sopa Lodge, Seronera Wildlife Lodge, Kusini Camp and the Serengeti Serena Lodge are fine for wildlife viewing during this time. So are campsites in the Ndutu / Naabi area. 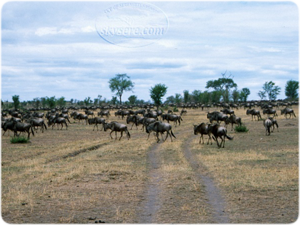 By the end of May the wildebeests have exhausted the Western Corridor’s best pastures and the herds must move further north. Entering the Lamai Wedge and the Mara Triangle breeding occurs May through June. This is a transitional period between the rains and the dry season. The Serengeti Serena Lodge, Seronera Wildlife Lodge, Sopa Lodge are central, easily accessible lodges for viewing the migration at this time. Grumeti River Camp, Mbalageti Serengeti and Kirawira Camp are also options. 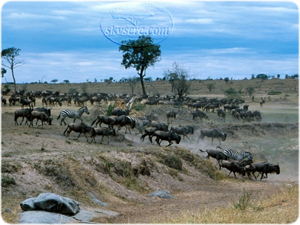 By July the countless herds gathered along the swollen Mara River - a final barrier from the short sweet grasses of the Maasai Mara. Sometimes the crossing place they chose is shallow allowing the majority of animals to pass safely. In other areas the waters are a dramatic obstacle because crocodiles are waiting for hesitant wildebeests stumbling on the crossing. Between July and October the wildebeests reside in the Mara. Tanzanian lodges recommended during this time include Kirawira Tented Camp, Grumeti River Camp and Mbalageti Serengeti in Western Corridor, Lobo Wildlife Lodge, Migration Camp and Klein’s Camp in Northern Area. 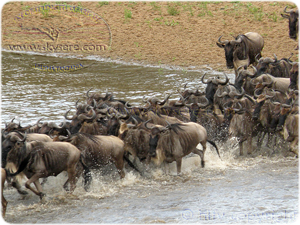 The storm clouds gathering in the south and the short rains coming again, the herds of wildebeests return southward to their breeding grounds. During the short rains of November the Wildebeest migration is best viewed from either Lobo Wildlife Lodge, Klein’s Camp, Mbuzi Mawe Serena Camp or Migration Camp. At the end of November the wildebeests gradually begin their migration back to the Southern Serengeti and early in the year they once again give birth. And the cycle begins again ...

The area around Ndutu is mainly covered by acacia, scrubs woodland, cantered by soda lakes in the green season this the loops here can be superb but even in the dry season their tends to be enough to keep one interested. The game drive in this areas is at its best from January through to March the weather is usually pretty good and there are so many animals in this plains, it is wonderful. The wildebeest tends to come into calf in February. The sweetness of this wobbly little creatures being tempered by the savageness with which they are captured and devoured by the carnivores, cheetah, hyena, lion and jackals here in abundance. 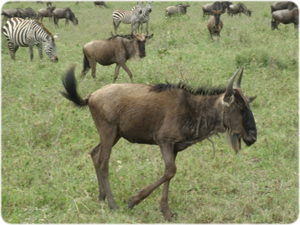 During the dry season from June to November and even right through to January, the short grass plains are apparently devoid of life. Some specialists remain some grants gazelles, cheetah, tops, ostrich and are able to sustain themselves by living only off moisture drown from the small plants etc. 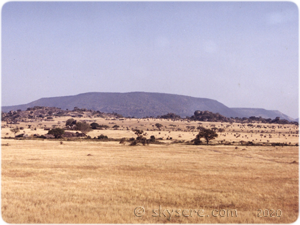 The short grass plains give way to long grass in the vicinity of the boarder between Ngorongoro conservation area and the Serengeti national park, from here the landscape turns into the classic Serengeti scenery. With infinite flat grass land disappearing off to the horizon marked here and there with little outcrops of weather beaten domed rocks, known as kopjes. 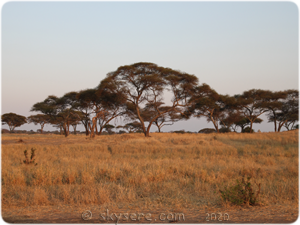 Invariable described as islands of rock in the sea of grass kopjes are the small rounded rocky outcrops that litter the otherwise featureless plains. The kopjes are in fact more like islands of rock in the sea of dust. For this outcrops are actually the peak of ranges of ancient crystalline hills which were submerged cast across the region by the volcanoes of Ngorongoro. 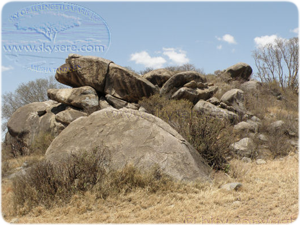